Most Lamentable and Excruciating Romeo and Juliet, A 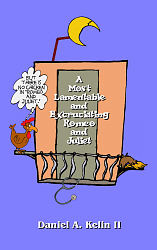 FARCE. “For never was a story of more woe…” A student production of Romeo and Juliet opens in just two days and the drama group is desperately trying to complete rehearsals. Friar Lawrence recites his lines as if he is a chicken suffering from brain-freeze. Juliet is constantly trying to upstage Romeo and insists that her death scene be obnoxiously long. Two friends, who always speak in unison, play the part of the Nurse, complete with matching modern nurse uniforms and stethoscopes. Then on opening night, the stage manager has to fill in as Romeo when the lead actor is hospitalized. Juliet freezes in place onstage with her mouth agape and has to be replaced by Freddy, wearing a dress and wig. Then throw in some tap dancing, a freestyle dance, and a cardboard moon on a stick that droops from boredom. As the show spirals into chaos, it goes down as the most hilarious and unexpected production of something that almost resembles Shakespeare’s classic!

Daniel A. Kelin II is an award-winning playwright who has written, directed, and acted in plays performed in Asia, the Pacific, and the US. A series of his plays have been produced by the Honolulu Theatre for Youth. Mr. Kelin lives in Honolulu, Hawaii.