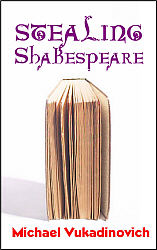 FARCE. Finalist, Writer’s Digest Annual Writing Contest 2005. Will, a regular Casanova-type, steals Shakespeare’s sonnets and recites them as his own in order to woo unwitting coeds. All seems to be going well for Will until he decides to steal James Joyce’s novel, Ulysses, and turn it in as his master’s thesis since “It’s like the middle part of the Bible, no one ever reads it, but everyone agrees it’s pretty damn good.” But to Will’s dismay, he receives a “C.” Infuriated, Will seeks out his English professor and demands that she give him an “A”—after all, he reasons, it is the greatest novel of the 20th century. While Will’s professor is re-evaluating his thesis, the ghost of James Joyce begins haunting Will and is determined to avenge the crime by stealing Will’s girlfriend. Quirky characters abound in this fresh, rollicking farce.

Michael Vukadinovich is the recipient of the 2005 Sidney Sheldon Playwriting Award, the Hal Kanter Comedy Award, the 2003 Loyola Marymount Playwriting Award, and the 2005 Norma Seigel Award. Mr. Vukadinovich teaches a playwriting workshop at UCLA and works at Red Hen Press, a non-profit literary press. Mr. Vukadinovich also works with literacy programs in the Los Angeles schools, where he holds writing workshops. He is a member of The Dramatists Guild of America and the Alliance of Los Angeles Playwrights.