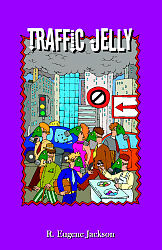 FARCE/SATIRE. It’s the near future and the streets are so clogged with vehicles that traffic has only moved three inches in three days. As Portia gets ready for her big date, she realizes she is out of mascara and sends her brother-in-law, Carson, to buy some at a drugstore just three blocks away. Five hours later, Carson still has not returned. Worried, Portia and her sister, Liz, turn on the TV to get the latest traffic and smog alert. Reporter Stephanie Stevens, whose hair is disintegrating from the smog, reports that Carson has caused a 954-car pileup outside the drugstore. Bloodied and shaken from the accident, Carson hoofs it home through the thick smog to deliver the mascara only to find out he got the wrong color! An over-the-top romp!