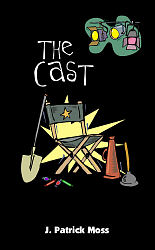 COMEDY. When the teacher who writes and directs the school play suddenly quits, the drama students are left to figure out how to save drama. With no play to perform, the club’s prima donna locks everyone in the school overnight until they come up with a play. As the night wears on, egos and personalities clash. There’s a tech guy no one can understand; an obsessive-compulsive stage manager; a videogame nerd; a student with superior Shakespearean acting skills; and a student obsessed with musicals. How many actors does it take to write a play? One to write the play while the others just sit around and say they could have done a better job! After “traversing the bleakest depths of the abyss,” the drama students come up with a play about drama students writing a play! Audiences will love this sidesplitting comedy. Easy to stage.

J. Patrick Moss is a diamond coach in the National Forensic League, the director of forensics at two high schools, and serves on the executive boards of three regional forensic leagues. Mr. Moss also writes, directs, and acts in plays for his school’s theater troupe. Mr. Moss is a native of Rutherford County, NC, where he lives with his two daughters.