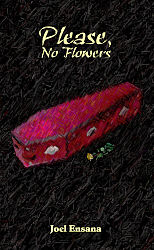 DRAMEDY. In this poignant, bittersweet play, two female ghosts, their bodies laid out in coffins at a funeral home, reflect on their lives and life choices as they watch as mourners pay their respects. Esther, a young woman who is delighted that she ended her life by jumping off the Golden Gate Bridge, is at first relieved that there are no flowers or mourners to cry for her. But when a young man brings her flowers, Esther questions her decision. Lena, an elderly woman who had run a delicatessen with her late husband, finds her death a respite from a crazy world, “So long, life, I’ve had enough of you!” But when Lena’s niece arrives, Lena starts to think that her lonely life as a workaholic with only her pet birds and dog for company wasn’t all for nothing. Soon, the mourners disappear and Lena and Esther return to their coffins. As the caretaker locks the door of the funeral parlor and closes the lids on the coffins, the room is filled with laughter, leaving the two ghosts to wonder if this is all some kind of joke. First place, Arts Council of Philadelphia National One-Act Playwriting Contest. First place, Norman Corwin National Playwriting Contest.

Joel Ensana has published several plays and more than 60 short stories. Mr. Ensana is a former playwright in residence at San Francisco State University and has won numerous awards for his writing. Originally from New Brunswick, NJ, he now resides in Santa Fe, NM.