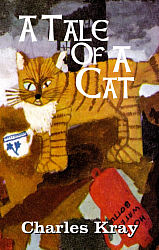 FARCE. Set in the remote area of Ireland’s heath country, several villagers try to persuade schoolteacher, Michael McDermott, to stop drinking. With teachers’ wages so low, they are afraid McDermott will drink himself to death and they won’t be able to get another teacher willing to work for so little pay. McDermott not only thwarts their intervention, but his behavior becomes increasingly eccentric as he decides to conduct a secret experiment with a cat named Paddy Shaw. Convinced that McDermott is a lost cause, the villagers are overjoyed to find a substitute teacher, Miss Kilrain, willing to fill in while Mac has a “rest” from teaching. The pretty, literate Miss Kilrain arrives, and things begin to look up until she meets the notorious Paddy Shaw.

Charles Kray is an award-winning playwright whose plays have been produced in regional and college theatres throughout the United States and Australia. Mr. Kray earned an MA in playwriting from UCLA, where he was awarded the MCA fellowship in creative writing. Mr. Kray lives in Carson, CA.