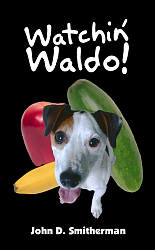 COMEDY. After 25 years of wedded “bliss,” Mr. Brendlmeyer has decided to take his wife on a trip to Las Vegas to celebrate their anniversary. John, an eager-to-please employee who has recently been promoted to vice president, suddenly finds himself in charge of Mr. Brendlmeyer’s company, his apartment, and his “dog,” Waldo. John tries to abide by Mr. Brendlmeyer’s rule forbidding parties and strange people in the apartment, but John soon finds his world spiraling into chaos when he meets a know-it-all runaway teenager, a tarot-card-reading yoga instructor, and his new foreign “bride.” Hilarity abounds with rapid-fire one-liners, physical comedy, and a host of kooky characters.

John D. Smitherman is an accomplished concert soloist and performer. Mr. Smitherman has played more than 100 different roles in opera and theatre and has published several plays.