Way of the World, The 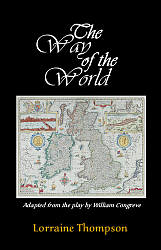 COMEDY. This easy-to-stage adaptation of William Congreve’s Restoration masterpiece features a hilarious cast of aristocratic rogues and schemers who are determined to prevent the marriage of two young lovers, Mr. Mirabell and Millamant. Millamant’s fortune rests on marrying a suitor who has been approved by her rich aunt, Lady Wishfort. But Lady Wishfort detests Mr. Mirabell because he pretended to be in love with her just to gain access to Millamant. To win both Millamant and her fortune, Mr. Mirabell has concocted a plot to dupe Lady Wishfort into marrying his servant, Mr. Waitwell. Then Mr. Mirabell will pretend to discover the imposter and release Lady Wishfort from the marriage on condition that she allow him to marry Millamant. The plan seems as though it may succeed, but the greedy, adulterous Mr. Fainall hears of Mr. Mirabell’s scheme and sets forth his own plot to gain access to the inheritance. Twists and turns abound as layers of deceit, greed, and villainy are peeled away. Considered one of the greatest of all Restoration comedies, this play’s witty repartee, colorful characters, and acts of human folly will delight audiences.

Lorraine Thompson works as a professional actress and serves as a department head and drama teacher at Athens Academy in Athens, GA. Ms. Thompson earned her MFA in theatre from The University of Georgia and is a member of the Educational Theatre Association. She and her husband, Tony, live in Farmington, GA.