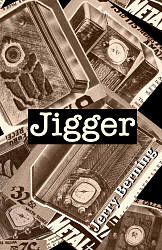 COMEDY/MURDER MYSTERY. The WWII era comes alive in this hilarious down-home murder-mystery. It’s 1943, and with most of the able-bodied men drafted and the women working in factories, there aren’t many people left to run the town. There’s just one elderly doctor who must do double duty as the town’s coroner. And the only police officer around is a retired police chief. When a wealthy resident is murdered, Jigger, a feisty factory foreman and fan of radio murder-mysteries, volunteers to help the police chief solve the crime. The only problem is that Jigger has just suffered a heart attack and has been ordered to stay in bed while he recuperates. Confined to his bedroom, Jigger elicits the help of his grandson, Butch, to gather clues. With a murderer running free about town, the horror only intensifies when Jigger finds out his wife, Maggie, has taken a job at the factory and that his bossy, overbearing mother-in-law has arrived to serve as his personal nursemaid. This character-driven mystery will delight audiences with its loveable, quirky cast.

Inspired by seeing innumerable performances at the award-winning South Coast Repertory Theatre, Jerry Berning studied playwriting at SCR and has written several plays. Born in a New York City suburb and raised in Indiana, Mr. Berning now resides with his wife in California, while the Berning children and grandchildren are scattered across the country.